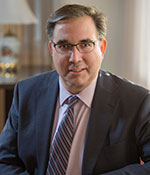 Steven Bennett joined the University as senior vice president for Academic Operations in 2017. He also serves as chief of staff in the Office of Academic Affairs, overseeing academic operations for administrative units that report to the Office of the Provost, including Syracuse Abroad and satellite facilities around the U.S. and the globe. He works closely with the provost and their leadership team on academic unit budgeting, personnel management, communications, advancement and strategic planning.

Bennett comes to Syracuse University from the Brookings Institution, where he served as vice president and chief operating officer. In this position, he supervised the interactions among the research programs in one of the nation’s largest and most influential think tanks. At Brookings, Bennett helped develop and implement the institution’s strategic plan and institution-wide interdisciplinary collaborations.

Bennett, who grew up in Syracuse, earned a BA from Colgate University and a master’s in public policy from Georgetown University. He returned to Syracuse for post-graduate study at the Institute for Creative Conflict Resolution in 1995. He can be reached at bennetts@syr.edu or 315.443.5725.

More from this Section