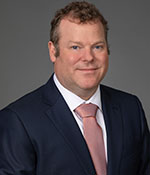 Duncan Brown is the Vice President for Research and Charles Brightman Endowed Professor of Physics. He earned his Ph.D. in physics from the University of Wisconsin-Milwaukee and spent three years at Caltech as a post-doctoral scholar, where he was mentored by Nobel Prize laureates Kip Thorne and Barry Barish before joining Syracuse University in 2007.

Brown is an internationally recognized leader in gravitational-wave astronomy and astrophysics and was integral to the discovery of gravitational waves by the Laser Interferometer Gravitational-wave Observatory (LIGO). A Fellow of the American Physical Society and a Research Corporation for Science Advancement Cottrell Scholar, Brown has won numerous awards for his contributions to LIGO’s ground-breaking discoveries, including the Gruber Cosmology Prize and the Breakthrough Prize in Fundamental Physics. Brown has devoted significant time to mentoring undergraduate and graduate students and postdoctoral scholars. He established a National Science Foundation-funded program that provides pathways for students from underrepresented groups to pursue a Ph.D. in physics at the University. He has taught large and small courses at both the graduate and undergraduate levels, including the popular undergraduate course “Introduction to Astronomy,” for which he won a Meredith Teaching Recognition Award.

Brown has worked to establish research connections across campus and was a leader in creating the the Research Computing group, whose work has enabled research and scholarship across the University’s schools and colleges. He brings deep experience with federal funding agencies, especially the National Science Foundation, and has extensive knowledge of foundation and corporate funding opportunities. As Vice President for Research, Brown’s goal is to enable wider landscape of research, scholarship, and creative endeavors across the Syracuse campus. He brings exceptional skills in creating and supporting research teams, in project management, and in mentoring faculty, students, and postdocs to the Office of Research.

More from this Section